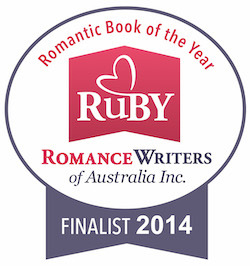 She didn’t expect to run into her first love…or to fall back in love with him.

At the age of eighteen, Julia Jones left her hometown – the small beachside town of Middle Point – with a head full of grand plans. Plans for an exciting life that didn’t involve a man street with only one pub or a particular boy named Ryan Blackburn.

But fifteen years and a lifetime later, Julia’s forced to put her career and big-city life on hold when she returns home to finalise her mother’s estate. Which is exactly where she runs smack-bang into the town’s hero, Ry. As in Ryan Blackburn! The sensible thing to do? Stay the hell away from him and head back to Melbourne as fast as her stilletos can carry her! But instead, Julia finds his offer of a helping hand and a hot body too delicious to refuse.

Soon, she’s ignoring her better judgement and diving into an ‘I’ll think about it tomorrow’ fling with Ry. But what she doesn’t realise is that tomorrow has a way of sneaking up on you… and that saying goodbye to her hometown – and to Ry – is so much harder the second time around.

Buy Nobody But Him on iBooks, Amazon or Booktopia.